So I haven't made a blog post in a while, largely because the NaNoWriMo challenge was so exhausting.  I'll be doing a catch-up of my Month in Review posts soon which I haven't done for a while now but in the meantime, my big news is about Botox. 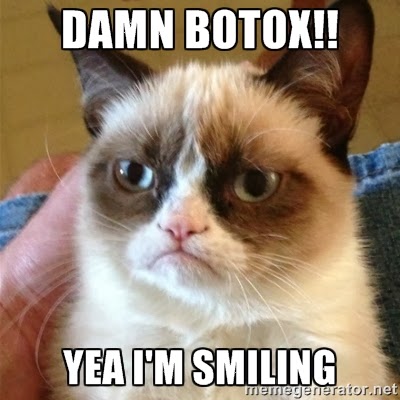 I had my usual appointment with the specialist nurse at the Headache Clinic at York Hospital at the end of November.  We discussed my medications and as things had been pretty bad for the 3 or 4 months prior to it, we both felt something needed to be changed as the medications I was on just weren't having enough of an effect.
She told me how they were going to be opening a botox for migraines clinic sometime in the first quarter of 2014 and that I should get myself referred for it then, which was GREAT news as I thought I was going to have to take myself down to London to The National Migraine Centre to be able to get the botox.
In the meantime, we decided I would start trying the last of the daily preventatives which I haven't tried yet, topiramate.  That's actually an anti-epilepsy drug and the reason it has been last on my list to try is because the side effects can be pretty harsh.

Excitingly though, I got a call from my specialist nurse the following day asking if I would be willing to be one of the two people they need to do the Botox on during their training day to be able to be certified to open the clinic.  I leapt at the chance!

So I didn't change my daily preventative medications at all, as we want to keep everything else as stable as possible to be able to fully gauge any effect of the Botox.

For Botox for migraines, it involves having a total of 31 injectons in the forehead, side of the head, back of the head and down the neck.

As someone who is terrified of needles and had to be taken out of class early when it was injection day at school and with all the hissy fits I'd throw about it I'd be back in class after everyone else was done, you can imagine this isn't something I was particularly looking forward to.  As any chronic migraineur will say though, I'll try anything if there's a chance it could help.

Each injection hurt, some sites more than others.  I thought I'd find that easier since I suffer pain on a daily basis but it was a sharp pain which is such a different kind of pain to my daily headache and my migraines.  They stopped hurting almost as soon as the needle was out though, and it was also strange to have pain go away so quickly.

I had a really bad headache for the following few days but then it was like a miracle.  I had over 3 weeks without a migraine!  I still had daily headache but such a long gap between migraines is just so unprecedented for me!

So it was just before Christmas when migraine arrived and when it did, it wasn't as bad as my migraines usually are.  My migraines normally come in at a 7 or 8 out of 10 on the pain scale, but this one was a 6.

Unfortunately, it was about this time that my recurring eye problem came back, and with the blind spots in my vision in one eye, comes exacerbated migraines.  So the migraine fairy came to visit again as soon as Christmas Day (at 3am having been woken by the pain, I was literally swearing at Santa!).  They came thick and fast then until I got myself an urgent referral appointment at the hospital and got some steroids.

Since getting onto the steroids, I got another fabulous (almost) 3 weeks between migraines, at which point I declared that Botox is Magic!

Sadly now, the Botox is wearing off.  I can tell this by the increased frequency of the migraines of course, but also by the fact the middle part of my forehead is getting some movement back!

I'm due for my second round of Botox on 7th March and I'm hoping to get as good results on the second round as I had on the first round and hopefully not obscured by anything like my eye problem then as well!  I'll also be asking about coming off Amitriptyline as a preventative since I haven't really felt any improvement from being on it and it leaves me so exhausted all the time that I think, if anything, it's making me worse.

The frustrating thing though, is that if the Botox works really well and after the second round I no longer fit into the arbitrary definition of 'chronic', then I can't get it again on the NHS as you need to be 'chronic' to classify to get it.  So if it works, I can't have any more, until I deteriorate to 'chronic' again, but if it doesn't work that well and I'm still 'chronic' I can have more!  Crazy.
I looked into paying to get it done at the National Migraine Centre in London but at over £600 plus the travel to London, I just can't afford that.

I look forward to sharing how the second round of the Botox goes after I've had in and in the meantime I have to ride out the Botox wearing off and the migraines getting worse between now and then!

Daisy Swaffer
Writing about my chronic migraine condition. There's a lot more to my life than my migraines but my blog will be focusing on migraines.